A surprise baby wasn’t even something we had considered as a remote possibility, if we had we might have been a bit more careful!

Way back in January of 2015 I had some final tests to confirm that I was having some fertility problems. Not because we were seriously trying for a baby or anything, but because I was having cycles that could range from 28 to 60 days and periods that would start out of nowhere with really heavy bleeding then disappear just as quickly.

The confirmed that it looked like I wasn’t ovulating properly, or at all, and that I had all the symptoms of PCOS. The indications being that we would probably need fertility treatment in order to conceive.

It wasn’t that big of a shock. We had suspected that for some time, we hadn’t been using contraception for nearly two years by this point, and although we were making a slight effort to have sex in my non-fertile periods that was really difficult when there was nothing regular to go off!

After we got the news we thought about trying for a baby then, seriously trying. I was working as a writer and due to graduate in the June, we had our own house, our income was stable if not massive and we knew time might be against us. I’m pretty certain a lot of people who get news like this go through a similar reaction. So for a few of months we did, I started charting, dieting and generally trying to improve my symptoms.

I had already lost nearly two stone on Slimming World before the diagnosis, but about the same time I found out about the PCOS I lost my grandmother, and I gave up on going to classes. I did keep the weight off though.

I did have one weird month, in the June 2015. Sore boobs, nausea in the evenings and I wondered. But I did a test which came back negative. Then, after my shortest cycle to date (28 days), I bled, heavily. So I assumed that the symptoms were possibly ovulation ones.

It was about then we had another serious discussion about starting a family, and decided that maybe it wasn’t the right time. I think maybe when we thought we might have been caught it made us think about whether it was the right time, also, I had been reading a lot about the PCOS and talking to women who had it and the miscarriage rate, frankly, scared me. We had already made the decision that we didn’t really want to look at fertility treatment, and we had already said we wanted to adopt, at least once. So our path seemed to be pretty clear.

We were going to spend some time building our careers, particularly as mine wasn’t bringing in an income and L. had always been interested in being a stay at home parent. Plus, with adoption, there wasn’t the time pressure hanging over us like it had felt there was to conceive naturally.

So we did a bit of work on the house. I graduated, and then I did some volunteering over the summer and autumn. I was interviewed and got a job in the first week of December, and was given a start date for January. Although it was only a six month contact it had the potential to be extended, and even if that wasn’t the case it was some relevant and up-to-date experience that I could build on.

So I spent December volunteering at a local charity, helping at their Christmas events, sorting donations, moving furniture, sorting boxes of tins and bags of food.

Then came Christmas, I was going on a family holiday and I was massively ratty and moody, so I thought “brilliant, bound to be on my period over Christmas”. Instead I developed a urine infection on Christmas Eve and spent the evening with a sky-high temperature guzzling cystitis sachets.

It seemed to clear up though and Christmas Morning was lovely, with some Champagne and Mulled Wine, then travelling home to see the in-laws and more Champagne. We had a family meal on New Years Eve too with, you guessed it, more Champagne. Plus a lovely Camembert and some Brie.

I had been having some cramping, even at this point, and my boobs had been sore. But I put it down to my period being on its way. So as I lay in bed on the Saturday morning, rubbing my sore tummy, I grumped. I was griping away about how annoyed I was that my period never arrived regularly, and that the bleeding was out of the blue and heavy, and really? how was I going to cope at work with this?

So, I decided that if my period hadn’t arrived by Monday I was going to make an appointment with my GP to get put on the pill, again, and I would take a pregnancy test on Monday morning. Not because I thought there was a remote possibility but because they always ask whether you might be, and then I could say “absolutely not, I took a test this morning”.

Then, because I am impatient, I decided to get up and see if I had any tests left over from June. Which I did. Almost as soon as the test got wet the first line appeared.

I think I must have sat there in shock for a few minutes. Then I ran into the bedroom and told him we were going to have a baby, to which he replied, “No we’re not.”

It took some adjustment. We’d gone from the idea of having children somewhere, quite firmly, well into the future, to having a child in a very short few months. Whilst I still had no long-term job, and the house still had a huge pile of work that needed doing to it and maybe we weren’t prepared.

So we kept telling ourselves that nobody ever was prepared, and, yes, finding out you’re pregnant two days before starting a new job isn’t a brilliant time, but there’s never a right time.

Then a couple of things happened. The cramping continued, and I had a little bleed, and we all of a sudden realised that what had happened in June was remarkably similar to how I was feeling now. Suddenly all the difficulties of having our baby now took a backseat to the worry that we might not actually have a choice as to whether the baby made it or not.

Luckily baby Pippin appears to be pretty tough, and though my midwife has subsequently confirmed (as much as can be at this date) that what happened in June was probably a chemical pregnancy they don’t feel that what happened then will have any baring on what happens now. Especially as we have gotten so much further this time. 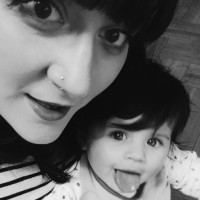 Back to top
vintagepinblog.wordpress.com/
The Curly Mother

Smell of Goodness in Your Kitchen!

A Baby on Board blog

mumfromthegreenroom.wordpress.com/
i carried a watermelon